Ben Groundwater is one of Australia’s most widely read travel writers.

He began his column, “The Backpacker”, for the Sydney Morning Herald and The Age more than a decade ago and has since become a regular feature writer for those publications, as well as a contributor to the Virgin Australia Magazine, Jetstar Magazine, GQ, Adventure.com, and more.

Ben is also an in-demand copywriter, and has contributed to campaigns for American Express, Air New Zealand, Destination Canada, Tourism New Zealand, APT, the BBC, and more. Ben is the author of two books, “Five Ways to Carry a Goat“, a travel memoir published by UQP, and “Go Your Own Way“, a solo travellers’ handbook, published by Hardie Grant.

For the past three years Ben has hosted Australia’s most popular travel podcast, “Flight of Fancy”, and appears regularly on radio and TV. In 2014 and 2015, Ben was named the Australian Society of Travel Writers’ “Travel Writer of the Year”. 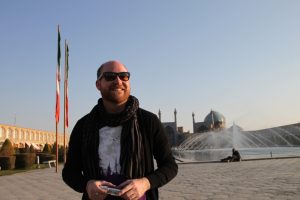 Ben Groundwater is available for a range of work including editorial assignments, copywriting for corporate clients, media appearances and event hosting. Get in touch with him via the social media links below, or at bengroundwater@gmail.com